The Last Blast of February!!

Last night we arrived home,
started supper prep before going to the gym
and braced for the coming storm.
The wind whipped up just like predicted
and the hydro flickered and promptly went out!!

We called ahead to the gym to see if they had
hydro and they did - so, we carried on
with our plans, hoping all would be well
by the time we returned home.

Alas, it was pitch dark in the neighbourhood
and we knew that we were in for a dark
and very stormy night! 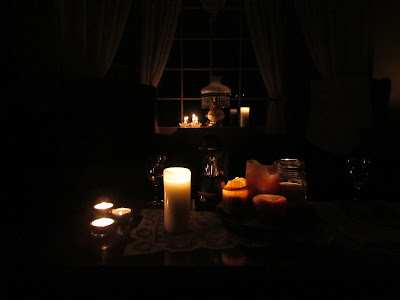 A candlelight supper of left-overs, warmed on the
woodstove tasted not too bad.
The planned menu of Salmon and fresh veggies
would have to wait for tomorrow's meal.

The wind howled bending the tall evergreen trees
that surround our farm house.

We were so thankful to have a warm cozy
fire to sit by as we attempted to solve
the latest crossword puzzle, using the only
flashlight that had a good battery. 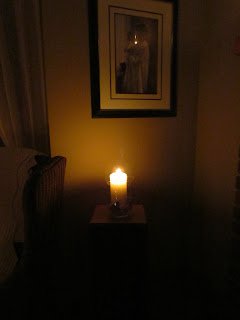 What IS the 6 letter word for
Saddle Horn starting with the letters PO??? 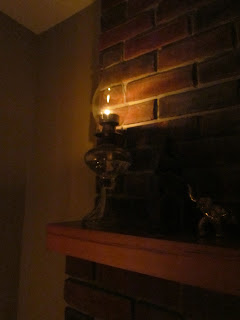 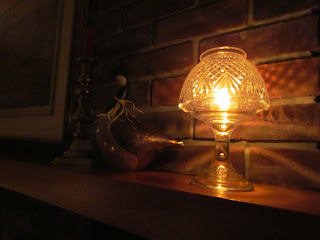 By morning - our lane was
cleared and off to work we went. 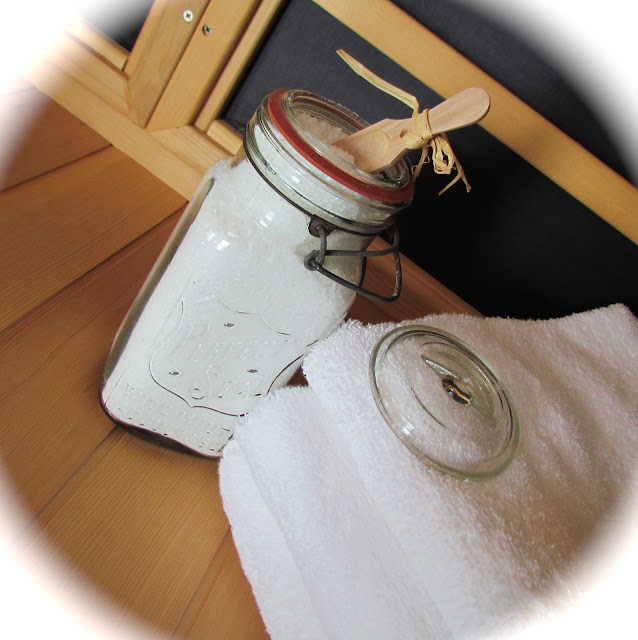 Salt baths are excellent for sore and aching muscles.  They are easy to make and are wonderful gift ideas when presented in a nice container or decorated mason jar!

Splash of fragrance or essential oil (recipe calls for 1/2 oz. but I just used about 1/4 oz. Lavender essential oil)
Measure out the salts and mix them together well, making sure to break up any clumps.
A few drops of food colouring can be added if you wish.
Use ¼ Cup per bath. 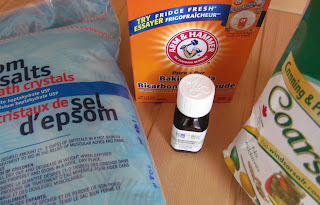 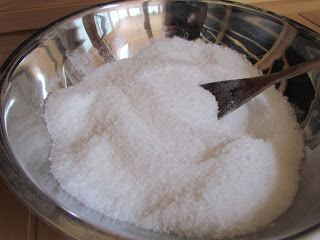 Email ThisBlogThis!Share to TwitterShare to FacebookShare to Pinterest
Labels: Bath and Beauty, Miscellaneous

I've taken the opportunity today to do some Quick Bread baking in preparation for a ladies group get-together this week. I've used one of my favourite recipes "Lemon Bread" that I got from my sister years ago - it always turns out.  The other two kinds are new to me......I think they will become my favourites too. 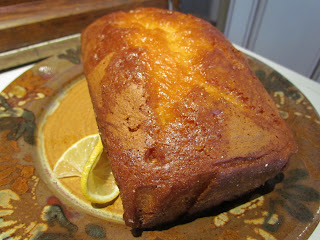 Evelyn's Lemon Loaf
This is super easy and makes 2 loaves:
4 Eggs - well beaten
1 pkg. Lemon Cake Mix
1 pkg. Lemon Instant Pudding
2/3 Cup Oil
2/3 Cup water
Glaze - 1/4 Cup lemon juice mixed with 3/4 Cup icing sugar.
Preheat oven to 350F. Prepare loaf pans by lining with waxed paper, leaving 1 1/2 inches sticking up above the pans.
Mix the cake mix and pudding in a large bowl.  Make a well in the dry mixture and add the eggs, oil and water.  Beat with a mixer for 5 minutes.
Pour into prepared loaf pans and bake for 45-50 minutes or until inserted toothpick comes out clean.  Remove from oven and let cool in pans for 5 minutes.  Poke holes into hot loaves with a knitting needle and slowly pour the glaze over loaves.  Let stand for an additional 20 minutes before removing from pans.

Nutty Brown Butter Banana Bread
This recipe appeared on Lizzy's blog called "That Skinny Chick can Bake" - isn't that a great name for a blog?  It's very true as well! Click on the link to find this fabulous recipe. 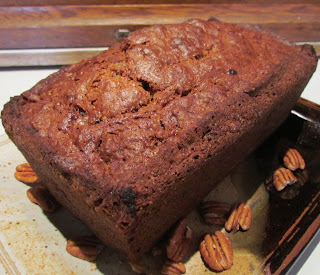 The loaf turned out beautifully and I couldn't resist trying anything like this that has browned butter as an ingredient!

If you've never tried browned butter on things like popcorn, veggies, mashed potatoes, etc. you have missed an amazing flavour.  You must try it! 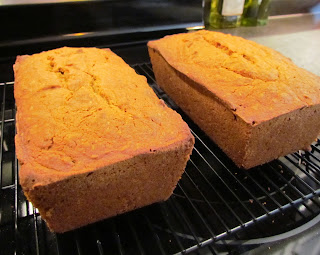 Last but not least - finally a great pumpkin bread recipe that uses butter and not oil.  I always find the oil recipes to be quite heavy and almost too moist!

Pumpkin Bread
Makes 2 loaves.
3 Cups all-purpose flour
1 tsp. ground cloves
2 tsp. cinnamon
1 tsp. ground nutmeg
1/2 tsp. salt
1 tsp. baking soda
1/2 tsp. baking powder
3 Cups sugar
1 Cup butter, very soft and melted a bit
3 Large Eggs
1 16 oz. can of pure pumpkin (2 Cups)
1 Cup chopped pecans - optional  (I put 1/2 Cup in one loaf and left the other one nut free).
Mix flour, spices, salt, baking soda and powder and set aside.  In your stand mixer bowl, put the sugar eggs and softened butter. Beat on medium speed for 2 minutes or until fluffy.  Add in the pumpkin and combine well. In thirds add the dry ingredients mixing gently between each third until the dry ingredients have been incorporated.  Pour batter into 2 greased loaf pans and bake at 350F for 1 hour or until toothpick inserted comes out clean and top is golden. Cool in pans for 10 minutes before removing to a cooling rack!

Now I'll just make some hot drinks and add a cheese tray and fruit tray for my get-together!  Most of the work is done - smile!!

How are you spending your day???

Our Sunday Suppers have evolved
into PIZZA!
We used to just make buttered popcorn
for Sunday supper,
but since I got my sweet lipstick red KitchenAid Mixer
it seems that pizza is the norm of late!
Is this a bad thing??

The goal is to have the pizza in the oven
before Amazing Race starts and tonight
happens to be the first episode of the season.....
or should we watch "Catch Me if You Can",
tonight's movie?
We can't get Downton Abbey but have been
watching Season 3 on DVD - maybe we'll choose
to watch that!

We'll have to decide soon ...... no "taping"
devices or Netflix or any of that stuff here in the boonies!

Hmmm - are we getting old and set in our ways or what!? 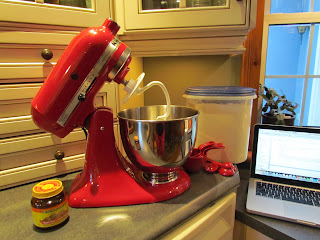 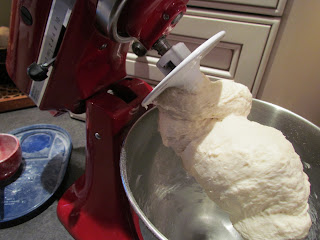 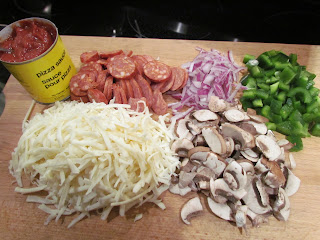 Chop all your favourite toppings
and watch the sun set
while the dough rises!
I love our February sunsets on these very cold
Winter evenings, even though I am longing for Spring. 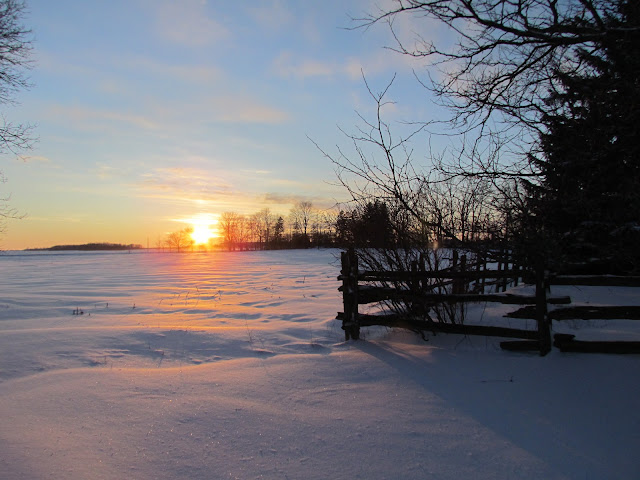 Here is the recipe for the pizza dough I've been using:


1 ½ Cups warm water
1 tsp. yeast – rounded
2 Tbsp. sugar
½ tsp. salt
1/3 Cup olive oil
4 Cups Flour – approx.
In large bowl combine water, yeast, sugar and salt – let sit for 5 minutes.  Stir in the oil, then a cup of flour at a time – continue adding flour, stirring with heavy spoon (or let your KitchenAid with dough hook do some of this work for you).   Knead in more flour as needed to get a smooth elastic dough. Let it rise in a greased bowl until doubled (approx. 1 hr.). I like to loosely cover the bowl with plastic wrap while rising. Punch dough down, knead a bit and divide in half. Roll half the dough on floured surface forming a pizza crust and place on greased pizza pan or stone.  I usually form the second pizza as well, spread half the pizza sauce on it and freeze it for next Sunday night's supper!
Spread half of the pizza sauce on the dough and top with your favourite toppings.  We like to use regular, good old "Canadian" ingredients such as mozzarella cheese, green pepper, red onion, mushrooms, and pepperoni slices.  Sometimes we also enjoy using a yummy combination of Pesto sauce, topped with cooked chicken strips, fresh basil and goat cheese!
Bake at 425F for 15-20 minutes.


Hints - if you have a "proofing" feature on your oven - use it for letting the dough rise.  I also heat a T-towel in
the microwave for 35 seconds and throw it over the plastic wrapped bowl for extra warmth.
Cheese - grate your own cheese with a box grater.  Don't use pre-grated packages of cheese.  Why? Because the pre-grated cheese is sprayed with something to keep it from sticking together - yuck! 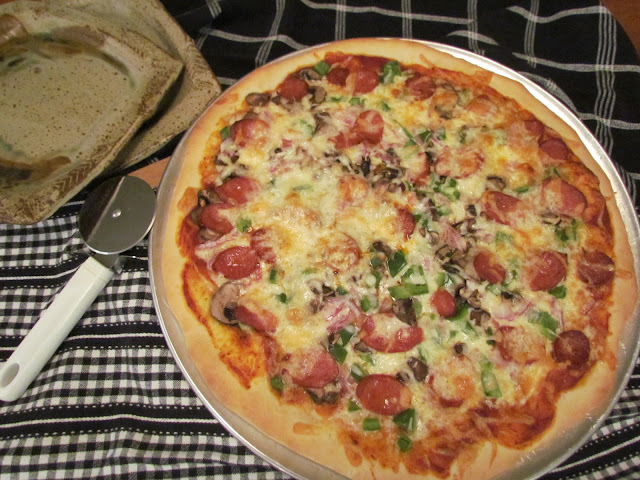 Love is in the Air

I just wanted to share
a few of my favourite Vintage Valentine Cards
that I inherited from my mom and dad's
collection ...........

They must have had such fun exchanging
these notes of Love..... 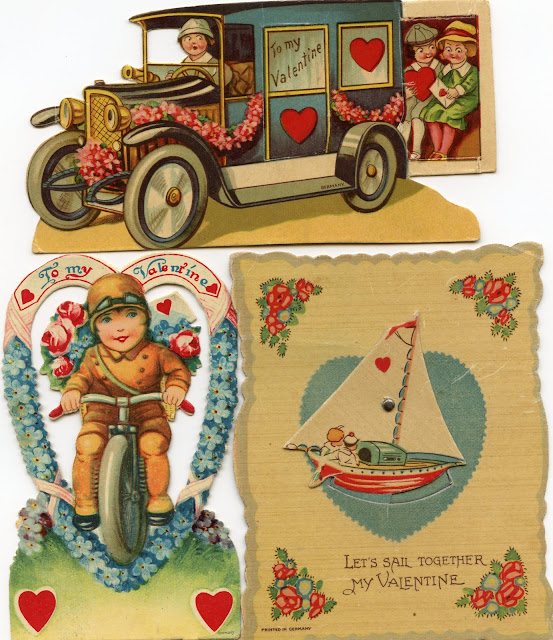 I am so thankful that they kept these
lovely cards!

The farmer's family also recently
discovered a wonderful collection of these
beautiful Vintage cards
from his side of the family.

I have wonderful memories of my
school days Valentine Parties......how
I wish I had kept some of those cards - sigh!
Trust me, by now they would be on the
verge of being Vintage as well!

Do you remember what your school days
Valentine Day parties were like?

Till next time ............... the steak is in the marinade for our special Dinner tonight!  A quiet "at home" celebration.  Happy Valentine's Day to you and yours.

Today I made my first love's
favourite pie!

He was kind and gentle
had a warm and welcoming smile
Dark brown kind eyes
Loved his family with all his heart!

That was my dad.

His very favourite pie was Chocolate Pie
and just about any other pie
that my mom made.

I used my mom's recipe
and this is how she wrote it in her
recipe book: 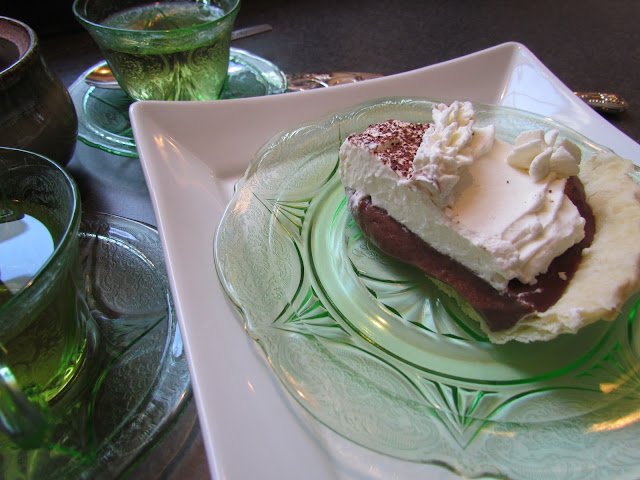 Foot note - My sweetheart likes this pie too!

Till next time ...... this is my February edition pie 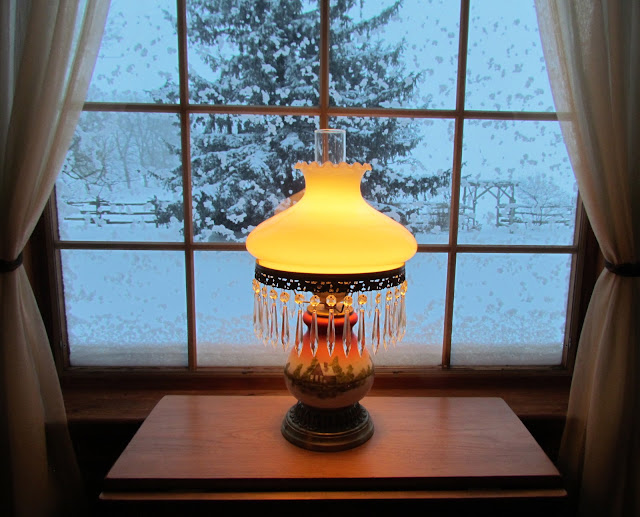 The woodstove is heating up 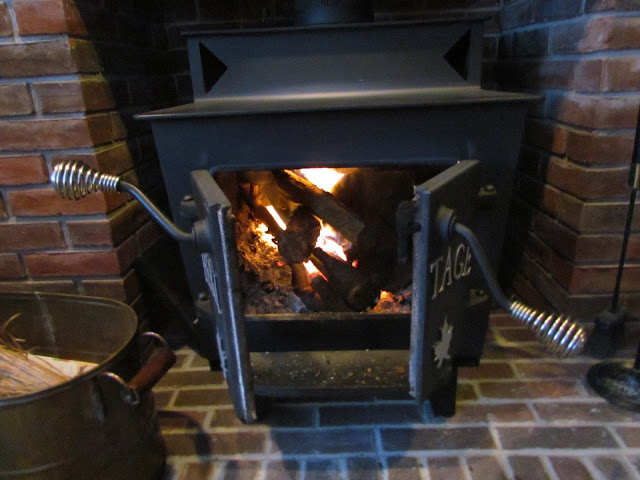 All the buses are cancelled
All the area schools are Closed! 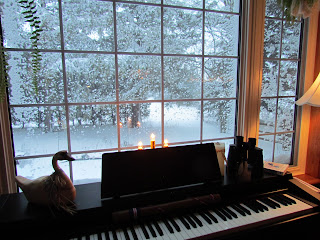 Every window in the house
is covered with snow - beautiful! 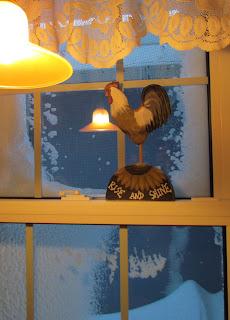 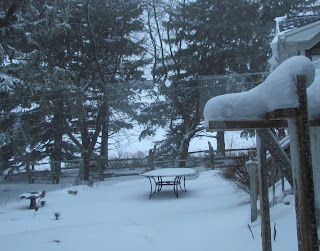 I shall enjoy the day,
clean the house,
catch up on the bookwork,
maybe even break out the sewing machine.

Stay warm and safe today everyone - where ever you may be....... 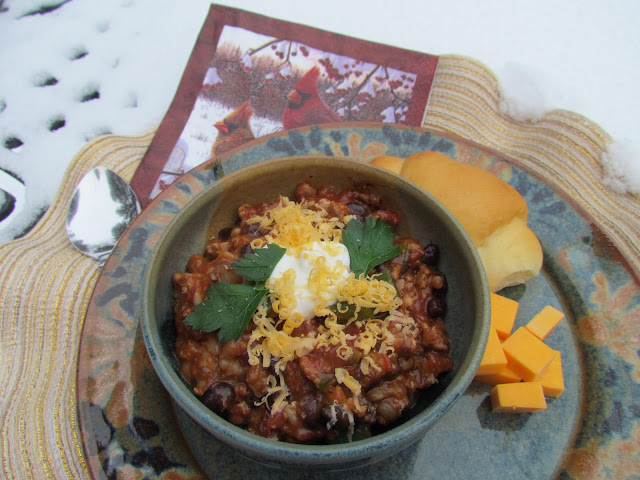 A beautiful snowy weekend
for enjoying some Turkey Chili
and the game!

Also, my favourite bird
has been feeding in the back
yard.....

How did you enjoy the game?
As hard as I try and as many times
as football has been explained to me
I'm afraid I still don't get it.
I DO love, however, the getting together with
friends and enjoying some hearty food and fellowship. 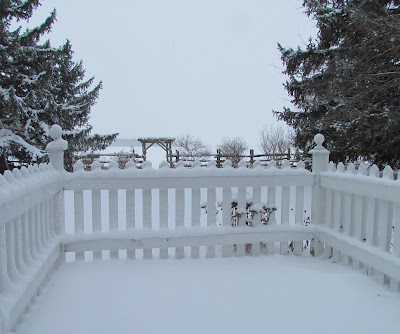 TURKEY CHILI - one of our favourites!
Turkey Chili with Barley and Black Eyed Beans! I almost always make a double batch and freeze portions for easy supper meals....
2 tsp. vegetable oil
1 Cup chopped onion
2 cloves garlic - crushed
1 lb. ground Turkey or chicken
1 19 oz. can chopped tomatoes with juice
1 1/2 Cups chicken stock
1/4 Cup barley - I always make my measurement heaping!
1 Tbsp. chili powder
1 Tbsp. minced and seeded jalapeno pepper (optional)
2 tsp. dried basil
1 tsp. dried oregano
2 bay leaves
1 19 oz. can drained and rinsed black eyed beans (I use black beans)
2 Tbsp. Tomato Paste
Mushrooms - throw in a handful or two (required by the farmer who loves shrooms)
Corn - sometimes I add in a cup of corn
In large pot heat oil and saute the onion and garlic.  Add in the meat and fry until no longer pink (8-10 minutes). Add in the remaining ingredients - bring to a boil and then turn down the heat to simmer uncovered for at least 30 minutes or until the barley is tender.  Let it simmer even longer for a nice thick Chili.
Garnish with chopped green onions, grated cheese, sour cream and parsley.
Enjoy!

What happened to May and now June??? So thankful that I took a few pictures here and there  to help me remember. It's been a bit of a ... 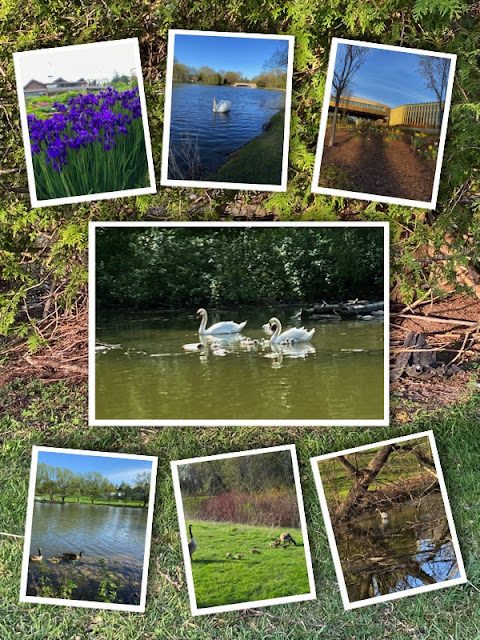